A newly painted classic is a wonderful sight. When that car is your own 1986 Ferrrari 328 GTS, it’s even better.

Thanks to a number of mishaps that will be included in two future Sound Classic pieces titled “How you know you’ve Picked the wrong auto shipping company” and “Bad things that happen when your friends drive your Ferrari”, the 328 GTS I purchased last year was treated to a full exterior body and paint restoration. Choosing Olympia-based Hoey’s Autobody was a no-brainer. After winning Best in Show at Concorso Italiano in California with his Lamborghini Miura, Paul Hoey’s expertise is recognized worldwide.
My 328 GTS was one of only a handful factory delivered in Blu Medio Metallico, so I opted to maintain this rare grayish-blue color. It took countless hours of work by the magic hands of Hoey’s team to straighten twenty years of dings and dimples. On a fine November day, though, my Ferrari’s beautiful Pininfarina-penned lines were as perfect as the day the car left the Maranello, Italy factory. 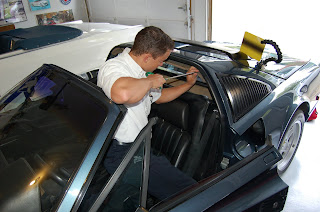 When the Ferrari came home from Hoey’s, it went directly into hibernation for the winter. Last week it was time to clean off the dust, polish, and put a thick coat of wax for a long season of drives and shows.

The Hippocratic Oath’s primary tenet of “first, do no harm” applies as much to collector cars as it does to medicine. Unfortunately, I wasn’t paying attention when I rested my hand on the car’s roof pillar while rubbing away dried wax on the fender. This seemingly structural area actually made of steel thinner than Costco margins was left with a dent in the exact form of my left palm.
A wave of nausea hit me. I was too embarrassed to call Paul Hoey to explain how I had destroyed his beautiful work.

The next day, my friend Andy Kaplowitz dropped by. An insurance agent, Andy has been sending his Allstate automotive clients for years to Glenn Martucci at Sameday Scratch and Dent. Glenn, he promised, would save the day.

Sameday is a pioneer in paintless dent removal techniques. Instead of hammers and dollies or pulling welded-on pins, they use special long reach tools to get behind dents and massage out damage. This means there’s no need to repaint, although for scratches they offer services to color-match and repair the painted area without refinishing the entire panel like traditional body shops.

The company is based in and has multiple locations throughout Washington. With core clients ranging from dozens of car dealerships to the Le May collection, they have worked on everything from used Hyundai’s to six-figure exotics and classics.

Instead of driving the clean Ferrari through the rain to their Olympia Automall shop, the offered to come to me. Glenn arrived at the Sound Classics garage with his top gun technician Joe Krawczyk, who has worked on just about everything in his five-year career with Sameday.

With the rear interior header panel removed, Joe assessed the damage, as well as checked for sufficient access underneath the area. He concluded it was a dent that could be repaired to perfect condition.

Paintless dent repair has very specific uses. Dents with excessive creasing, paint splitting or those larger than the size of a baseball are often better addressed with other methods. Sameday even has repaired many hail damaged cars, spending hours taking out hundreds of small depressions. Joe indicated that while it takes longer due to the more complicated properties of the metal, the system also works on dents in aluminum panels. 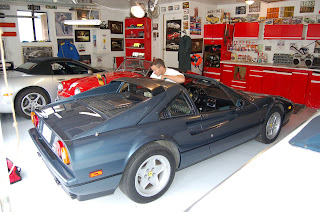 Attaching a small light reflector, Joe went to work. Watching him use the tool to apply pressure against the underside of the dent proved a process of equal parts art and science. One might think such a small dent would take just minutes, but returning the panel to perfect condition requires patience and skilled hands. After roughly an hour of delicate motions, the Ferrari’s roof panel was perfect again.

Some mistakenly believe Sameday’s paintless dent repair service is a cheap alternative to painting. Removing dents can cost the same as an entire Maaco repaint. For restoring a show-quality paint job like the one Paul Hoey did on my Ferrari, it is the best, most cost effective solution, though.

Sameday also applies this concept to interior leather repair. They can eliminate wear and tear spots on seats and panels with a color-matched (via a spectrophotometer) permanent coating.

Paul Hoey brought my Ferrari to show condition. Thanks to Sameday, it can stay there… even if something else tests the strength of Italian metal in the future.